a comic opera in one act

Part of the Act was commissioned by Washington National Opera as a part of the inaugural American Opera Initiative produced at the Kennedy Center during the 2012-2013 season.

Part of the Act  was featured on the 1st Annual Fresh Squeezed Ounce of Opera showcase in Austin, Texas in April 2016.

Part of the Act  was awarded a Festival Award in Opera at the Boston Metro Opera 2014 International Composers’ Competition.

Part of the Act was recorded on March 23-25, 2015 in Philadelphia, PA.
You can listen to the studio recording here!

Ginger Taylor is, perhaps, the most famous actress on the Orpheum Circuit: her beauty and talent cause the hearts of even the most honorable men to beat a little faster.  When Mabel McGinley, a crazed housewife armed with a revolver, breaks into Ginger’s dressing room and accuses her of having an extramarital affair with Mabel’s husband, Seamus, Ginger attempts to disarm Mabel with the truth: this sort of thing happens to beautiful actresses all the time, and it is an attempt by the husband to test his wife’s loyalty by seemingly having an affair in order to make her extremely jealous.  When Seamus suddenly emerges from Ginger’s closet and explains himself, we must decide for ourselves what is the truth, what is a lie, and what is merely a “part of the act.” 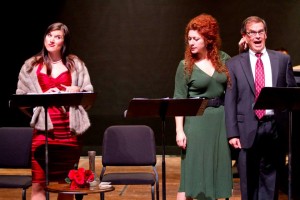